“There are two schools of thought on emergence. In weak emergence, the new properties arise as a result of the interactions at an elemental level and the emergent property is reducible to its individual components, that is, you can figure out the steps from one level to the next, which would be the deterministic view. Whereas, in strong emergence, the new property is irreducible, is more than the sum of its parts, and because of the amplification of random events, the laws cannot be predicted by an underlying fundamental theory or from an understanding of the laws of another level of organization.”

–Gazzaniga, Michael S.Who’s in Charge?: Free Will and the Science of the Brain. New York: Ecco, 2011. (viacarvalhais)

Little Printer is a product of now. It is a product, a tangible thing, but is also a product, in the sense of a consequence, of contemporary culture. It humbly and accessibly exemplifies how physical and digital have merged to become one, to become hybrid objects, to demonstrate how objects might become networked, and how domestic objects might behave.

It might be argued that some of the main themes infused in generative art are those to do with a kind of techno-utopianism and futurism. Have you come across any generative artworks that deal with dystopian themes or have a sense of anachronism about them? More importantly are the technologies and software used in creating these artworks inherently defining their aesthetics?

Now we also know that if you study absolute world class, best virtuoso violin players, none of them put in more than about four or so hours of practice in a day, because that’s the cognitive limit. And this limit actually shows up in a lot of different fields where people do intense training, that you really can’t do about more than four or so hours of this type of really mental strain.

All disruptive technologies upset traditional power balances, and the Internet is no exception. The standard story is that it empowers the powerless, but that’s only half the story. The Internet empowers everyone. Powerful institutions might be slow to make use of that new power, but since they are powerful, they can use it more effectively. Governments and corporations have woken up to the fact that not only can they use the Internet, they can control it for their interests. Unless we start deliberately debating the future we want to live in, and information technology in enabling that world, we will end up with an Internet that benefits existing power structures and not society in general.

“There is so much photography, especially of a ‘seriouss’ [sic!] nature, that ties you up in knots, that seeks to put you into a particular place in the way that you see and understand it. It’s a kind of photographic correctness, where even though you may agree wholeheartedly with what is being said or shown, the resentment at being forced to agree with the sentiments of the work, the inability of the work to offer even a second dimension or alternative perspective makes one want to disagree with it just for the sake of it. It’s Stupid Photography that doesn’t enlighten or engage, but just shuts things up and makes one long for something that is open and free. Photography isn’t always open or free.”

Pretty much all the evidence (rather than anecdote) I can find shows that co-located teams in a single team room environment are the most productive - all other things being equal. (And I’m saying this as somebody who spends a lot of their time working from home, and talking to other folk over Skype, etc. There are reasons for telecommuting - personal preference, getting access to people who cannot co-locate, etc. But for business productivity I’m not seeing much, if any, evidence).

A Man Feeding Swans in the Snow Poland black and white birds (via http://www.thisiscolossal.com/2013/01/a-man-feeding-swans-in-the-snow/)

This human-nature hybrid is true not just of the climate system, but of the planet as a whole, although it would be enough for it to be true of the climate system. We know from the new discipline of Earth system science that changes in the atmosphere affect not just the weather but the Earth’s hydrosphere (the watery parts), the biosphere (living creatures) and even the lithosphere (the Earth’s crust). They are all linked by the great natural cycles and processes that make the planet so dynamic. In short, everything is in play.

reconfigured pixels in exploding flowers & other matters by Ori Gersht

reconfigured pixels in exploding flowers & other matters by Ori Gersht

In late 2009, the Ministry organized a 1,000-member strong national gathering - a drill in collaborative “Where do we go from here?” brainstorming involving randomly selected citizens and a few handpicked prominent thinkers (Magnusson and Jónsdóttir were there). Groups of participants bounced ideas off each other, ultimately formulating a list of shared values. The summit organizers, through Magnusson and his tech-nerd compatriots, took those suggestions and came up with an aggregation of cherished mores in short order. Not long after the discussions finished - thanks to social media crowdsourcing - Iceland had a decent estimate of its moral compass.

“We are at the beginning of a new era in power markets,” the UBS analysts write. ”Purely based on economics, we believe almost every family home and every commercial rooftop in Germany, Italy and Spain should be equipped with a solar system by the end of this decade.” It says up to 18% of electricity demand could be replaced by self-produced solar power in these markets, at the expense of centralised generation. Even as soon as 2020, up to 43GW of unsubsidised solar could be installed in Germany, Italy and Spain, replacing up to 9 per cent of electricity demand. This is on top of reduction in demand caused by energy efficiency measures and weak GDP growth.

The Ghost Army was a United States Army tactical deception unit during World War II officially known as the 23rd Headquarters Special Troops. The 1,100-man unit was given a unique mission within the Army to impersonate other U.S. Army units to deceive the enemy.

From a few weeks after D-Day, when they landed in France, until the end of the war, they put on a traveling road show, using inflatable tanks, sound trucks, phony radio transmissions and playacting. They staged more than 20 battlefield deceptions, often operating very close to the front lines. Their mission was kept secret until 1996, and elements of it remain classified.

phalaenopsis by amy buxton (via http://flic.kr/p/dNoRwF )

medusa by amy buxton (via http://flic.kr/p/dvSkjX )

Just Below Timberline by Olli Kekäläinen (via http://flic.kr/p/7iUxfb ) 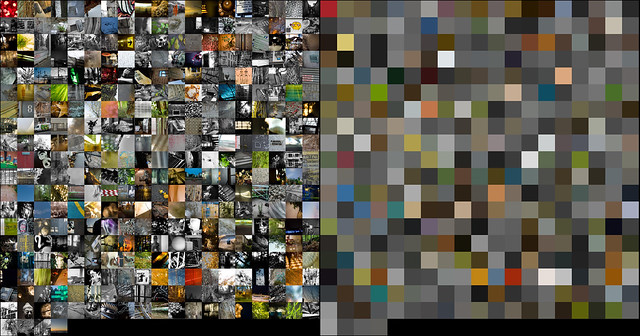 During the 366 days of 2012 i managed to take at least one photo per day. This collection can be found in the set 02012 (366) and forms a reasonable approximation of what i found interesting to photograph and where i happend to be at various points during the year. With the help of the Flickr API here is something of an overview…

Journal of Errology (JoE) is a research repository that enables sharing and discussions on those unpublished futile hypotheses, micro research papers, errors, iterations, negative results, false starts, shortfalls, micro-papers and other original stumbles that are part of a larger successful research in biological sciences.

A team of designers and scientists at Cambridge University will be exhibiting a novel moss table at the London Design Festival later this week. The prototype table will showcase an emerging technology called biophotovoltaics (BPV) which uses the natural process of photosynthesis to generate electrical energy.

Hypothes.is will be a distributed, open-source platform for the collaborative evaluation of information. It will enable sentence-level critique of written words combined with a sophisticated yet easy-to-use model of community peer-review. It will work as an overlay on top of any stable content, including news, blogs, scientific articles, books, terms of service, ballot initiatives, legislation and regulations, software code and more-without requiring participation of the underlying site.

The overarching goals of the Open Annotation Collaboration (OAC) are to facilitate to emergence of a Web and resource-centric interoperable annotation environment that allows leveraging annotations across the boundaries of annotation clients, annotation servers, and content collections, to demonstrate the utility of this environment, and to see widespread adoption of this environment.

The Arctic Station by Reuben Wu (via http://flic.kr/p/a5chSY )

by Colourful Life (Teresa) (via http://flic.kr/p/dMLZQB )

“As regards illegal activity—people will break the law regardless of whether we know their names online or not. Laws already exist for those cases; we don’t need more. The general principles should not change simply because there is new, or widely misunderstood, technology.”

Aaron was always and only working for (at least his conception of) the public good. He was brilliant, and funny. A kid genius. A soul, a conscience, the source of a question I have asked myself a million times: What would Aaron think? That person is gone today, driven to the edge by what a decent society would only call bullying. I get wrong. But I also get proportionality. And if you don’t get both, you don’t deserve to have the power of the United States government behind you.

“In its new design, Google’s search engine doesn’t push us outward; it turns us inward. It gives us information that fits the behavior and needs and biases we have displayed in the past, as meticulously interpreted by Google’s algorithms. Because it reinforces the existing state of the self rather than challenging it, it subverts the act of searching. We find out little about anything, least of all ourselves, through self-absorption.”

Nope, this is not a still from Blade Runner. It’s smog in Beijing.

Some of my friends in Beijing have said the air burns their eyes and lungs. Here’s a picture of my colleague with his double-barreled air mask. Intense. Note he’s wearing a trash bag to protect his suit from the dirty air when he goes out.

Why do people say things like ‘hot as hell’ or 'loud as hell’? Who’s to say hell isn’t freezing cold with a void of deafening silence?? by EleanorRigby236 (via http://flic.kr/p/c9pj35 )

Boil the Frog lets you create a playlist of songs that gradually takes you from one music style to another. It’s like the proverbial frog in the pot of water. If you heat up the pot slowly enough, the frog will never notice that he’s being made into a stew and jump out of the pot. With a Boil the frog playlist you can do the same, but with music.